Lakweshia Ewing and Chris Sands were eating at Uncle Larry’s Restaurant last Thursday considering what they could do as concern about COVID-19 spread and cities across the country shut down. Hamilton County Schools announced it would close for the month. Gov. Bill Lee declared a state of emergency.

By Friday, the same day Hamilton County announced its first confirmed case, the two had created We Over Me Chattanooga and began sharing information on Facebook about school closing and where local families could get food.

“We Over Me is literally a collaborative community group who desires to support and inform the Hamilton County community during the state of emergency,” Sands said.

The group is gathering food to distribute for families with children 18 years old and younger, as well as to elderly people. They are distributing food Monday through Friday from 11 a.m. to 1 p.m. at locations throughout the city. The group is adding new locations, Sands said, and directed people to the group’s Facebook page to find the latest updates.

“As we get more food, we’ll make sure we’re able to take care of more people,” Sands said.

However, the outpouring of support has created challenges, he said. The group is limiting the number of volunteers who are handing out food to lessen the chance of spreading the coronavirus.

LaDarius Price, community outreach specialist at Cempa Community Care, would otherwise be leading education and community events for young people, but with the wave of closures he is cooking and distributing food to those in need for We Over Me.

“We’re just doing what we have to do,” Price said. “We’re not depending on other people to get this work done.”

Children in the county — who will now be out of school until at least April 13 — are at particular risk of being food insecure since many rely on the school system for consistent meals, Price said.

Sands said the group will re-evaluate what it can do for the community later in the week as social distancing and self-isolation shifts from a novelty to a norm. So far the support has been great, he said.

“We are grateful for what the community has been able to do,” Sands said. “It takes all of us to take care of all of us.”

On Saturday morning, Rose Cox created the Facebook group Chattanooga COVID-19 Community Assistance for people to post their needs — such as groceries or medicine — or share local resources they found.

“People were just posting it on their Facebook but it was only really reaching a certain audience at that point,” Cox said. “My thoughts were, ‘Why isn’t there a forum for this where we can connect and help one another?'”

The group had more than a thousand members within a day.

“It just became this really beautiful effort overnight. Not even overnight, just in a few hours,” Cox said.

By Monday afternoon, there were nearly 5,400 people. Their hundreds of posts turned the group into a hub for people to share what they can — extra hand sanitizer, ways to make homemade masks and rides to pick up supplies, for example. Parents are sharing ways to keep children engaged.

The dynamic of the group shifted as panic buying spread across the city and stores sold out of toilet paper. People began posting notices of what remained available at certain stores, she said.

Moderating the page is now nearly a full-time job, Cox said. Unlike what is appearing on people’s Facebook timelines, the page has stayed free of misinformation or fearmongering. What is happening there, strangers helping strangers, has made her cry, she said.

“I think people are at home and they’re just looking for a little bit of hope,” Cox said. “You go on there and you’re seeing informative articles or seeing people being nice to each other.” 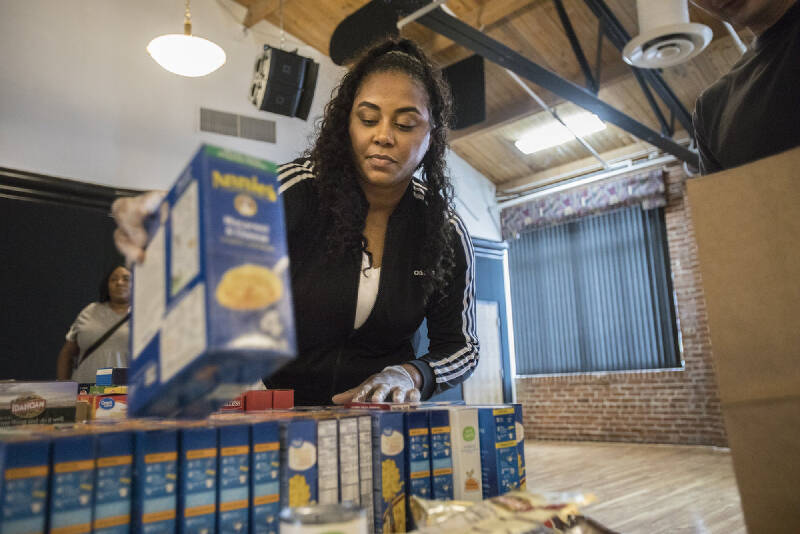